I've been trying to refrain from posting about the American Democratic and Republican races but my resolve was clearly weak. This back and forth in The Huffington Post interested me:

If John Edwards stays in the race, he might, in the end, become nothing other than the Southern white man who stood in the way of the black man. And for that, he would deserve a lifetime of liberal condemnation.

To which Jane Smiley, one of my favourite novelists, responds:

Being Canadian, my endorsement of a candidate in a US race is not on the radar but, if it weren't for Edwards' unfortunate support of the death penalty, he'd be my choice.

Many people seem to be writing Edwards off but J-Walk posted this chart showing poll results for various Dem/Rep election match-ups. 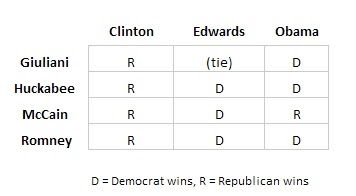 Since Giuliani's chances of winning the nomination are getting slimmer all the time, perhaps it's time the Democrats gave Edwards a more serious look.

Email ThisBlogThis!Share to TwitterShare to FacebookShare to Pinterest
Labels: politics