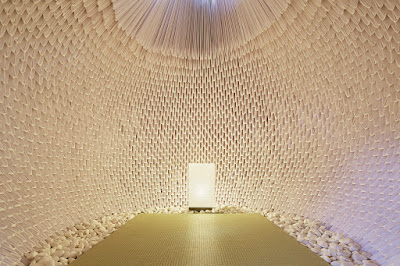 Tokyo-based architect Kazuya Katagiri and designer Akinori Inuzuka constructed Shi-an, a mobile tea house constructed entirely from folded paper without the use of bolts or adhesives. 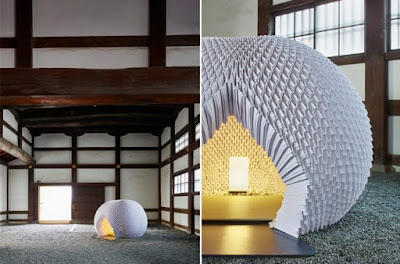 Photos by Takuya Watanabe
More: Spoon & Tamago
Posted by The Nag at 4/05/2020 No comments:


New @gothamist bingo card up now! Something fun in all of this uncertainty. It certainly helped my stress and anxiety to have something fun to create 🎨 Link in profile! #stayhome
A post shared by Sarah Butler 🎨 (@sarahcbutler_art) on Apr 2, 2020 at 11:05am PDT

If I Wrote a Coronavirus Episode

Vulture asked some TV writers how they think their characters would navigate social distancing? They came up with some very convincing episodes of some of our favourite shows. The 30 Rock piece by Sam Means is my favourite:

"Tracy has already contracted and survived the virus (“My snakes eat bats and then I use my snakes to practice French kissing, so it was inevitable, Liz Lemon!”), so he would declare himself an immune “green person” and set out to help. Tracy: “Like Mister Rogers said, ‘Look like the helpers.’” So, dressed as a firefighter, he would volunteer his time delivering illegal box jellyfish to the elderly.
Jack would try to get Liz to go to the secret GE island off the coast of Connecticut: “It will just be the top executives, any wives under 40, and yes, Lauer will be there, but only because it was built into his deal years ago.” Liz refuses to go because of her desire to be egalitarian but also because everyone would probably be barefoot. Pass. She would shelter in place like nobody’s business and still somehow dodge sex with James Marsden."  Read more of the 30 Rock Coronavirus episode here.

From Sesame Street to Frasier to Justified: Read lots more Coronavirus Episodes here
Posted by The Nag at 4/05/2020 No comments:

Take a Tour of The NYBG Orchid Show Without Leaving Home 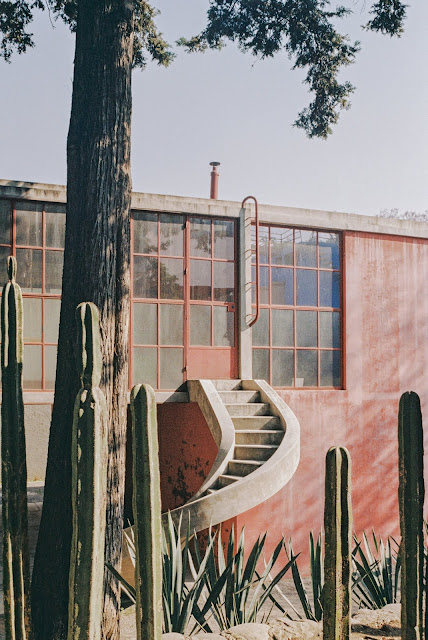 Above is the modernist red house architect Juan O'Gorman designed for his father He completed two modernist houses in Mexico. The other was for artists Diego Rivera and Frida Kahlo which is well-known.

Small Breeds:This is a great read and not all about dog shit, but those parts are really funny. Cloo has been taking dumps in my apartment for months now, but he’s never done anything this theatrical. “I came home to literal shit on my walls,” I wail to everyone who will listen. “Like he’s a goddamn monkey. And there was none even on him, which means he either a) licked it off or b) is a witch.” “Definitely the latter,” everyone agrees. “Have you tried crating him?” Via Imperica

In this podcast from Scientific American linguists discuss the development of a new accent in a research station in Antarctica.

Perhaps the worst movie of all time, brought to terrifying puppet life: Manos—The Hands of Felt, a puppet-version of the MST3K classic. Via perfect for roquefort cheese:

The only surviving recording of Virginia Woolf's voice.  It was recorded on April 29, 1937, as part of a BBC radio broadcast series called “Words Fail Me.”

colors.lol - Overly descriptive color palettes When all this is over I might freshen up my house with a coat of posttraumatic dark blue grey. I decided the gynomonoecious bright light blue was a bit much.

People who have eaten chez moi over the past decade will know that I love Deb Perelman. Her recipes have never failed me.  My current faves are Black Pepper Eggplant With Tofu and Lamb Chops with Pistachio Tapenade. The Best Smitten Kitchen Recipes, According to Eater Editors

A virtual tour of London's Charterhouse It is the final resting place for many who died from The Black Death which swept through Europe between 1347 and 1351. The problem with virtual tours is that you can't stop into a charming pub for a pint afterwards.Via Things

Meet Zimmy, the Quarantine Dog  He looks like a project abandoned by a kindergarten class. They assembled him from scraps, began coloring with a black marker, got bored and started daubing at his body, then quit altogether.

Date bait? The time a serial killer appeared on The Dating Game. He was a registered sex offender and a convicted rapist. By this time he'd also killed several women and went on to kill at least 7 and possibly over 100. See video Via Miss C

The New York Times 36 Hours column called out to readers for ideas of what people could do over a weekend, wherever they are in the world (even if they are homebound), that embraced the ethos of travel.

Historic Dishes Born From Tough Times That You Can Make at Home How about a slugburger with an anthill cake for dessert?

10 films with amazing architecture to stream during isolation

Nostalgia for the future: documenting Bucharest’s crumbling modernist heritage Via

The Frontier Couple Who Chose Death Over Life Apart Via Duck Soup
Posted by The Nag at 4/05/2020 No comments: