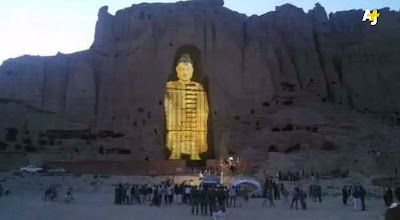 Built in the 6th century, the huge Bamiyan Buddhas towered over a holy Buddhist site in Afghanistan’s Bamiyan Valley. Carved into a sheer cliff face, they were an awe inspiring combination of devotional art and ingenious craftsmanship. In 2001, they were destroyed by Taliban militants. Their destruction caused a global outcry. A Chinese couple, Janson Yu and Liyan Hu, has used a 3-D holographic projector to re-create the Buddhas in the cliff faces where they stood for centuries. The projector was built at a cost of over $120,000.