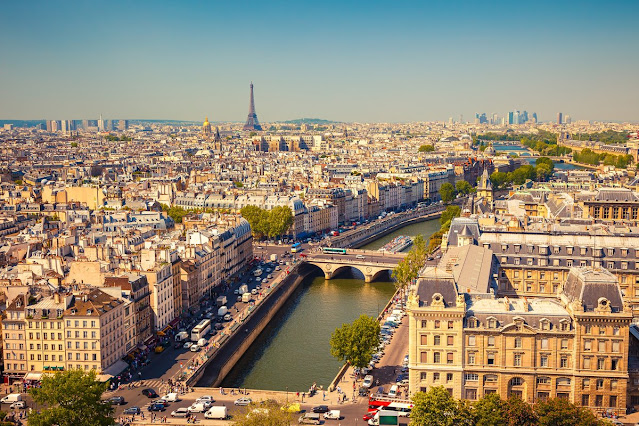 The Paris that we know and love today was born from the vision of just two men and the City of Light was smart enough to know not to mess with a good thing. Via Things Magazine (Image above)

The Day After Trinity  This 1981 documentary follows the life of J. Robert Oppenheimer, a gentle and eloquent physicist and the head of the Manhattan Project. (full documentary via Facebook pal Hal Prentice)

This is real: Husband-calling contest at the Iowa State Fair

My friend Alan Parker posted this story on Facebook about a dog in Buenos Aires: "He is between eight and nine years old, and has lived in the bar for four years ... He used to live on Paso street, because he had some owners who moved and abandoned him. Later a lady adopted him, but Corchito did not feel comfortable with the other pets and returned to the street. The dog is very affectionate and is part of the bar. Every time a person goes alone for breakfast, lunch, snack or dinner, Corchito gets on a chair next to him and keeps company." He looks a lot like our Liz. (See photos of Corchito here)

Sometimes we can all use a little reassurance that things are going to be okay. Supportive cat comics

Calling all spellers! 10 Typos is a proofreading game. (via Webcurios)

Satellite Images Discover a New Emperor Penguin Colony in Antarctica The colony of 500 birds were discovered thanks to the guano stains they leave which stand out against the ice.

While I spend my time posting snarky tweets my friend Sally has been doing some real writing: The thrill of performing (and a strapless bra) was all we needed at 14. Her new contemporary romance novel, So Hard To Do, is also launching this month.

Book lover Benedict Cumberbatch reads Kurt Vonnegut’s 1973 response to a book burning school board chairman.
A modern take on the Adirondack Chair: The Bask Lounge Chair would be hard to store and it's way too pricey for me but I like it.
Fruits, sandwiches and turkey dinners were crocheted with love by textile artist Maria Skog.
Writer Hanif Kureishi collapsed. His dispatches on recovery are captivating readers.
(New York Times)
Cat Cop (via Mr. Nag)

The World's Oldest Restaurant has served Christopher Columbus, Mozart, and Clint Eastwood (but not all at once).

The community of sled dogs on British bases in Antarctica began when 25 huskies from Labrador, Canada, arrived at Hope Bay in 1945. The Intrepid, Furry Explorers Who Mapped Antarctica

The villa from White Lotus is a decadent Airbnb rental. Villa Tasca, located in Sicily, dates from the 1500s and sits within 20 acres of formal gardens. (Lots of nice pictures)

I swore I wouldn't follow yet another Instagram account but I couldn't resist GallicaBnF, the digital library of the National Library of France and its partners.