In 1921 inventor Harry McGrath obtained a patent for a gun firing device capable of being concealed under the coat and fired when the hands are raised or at any angle. 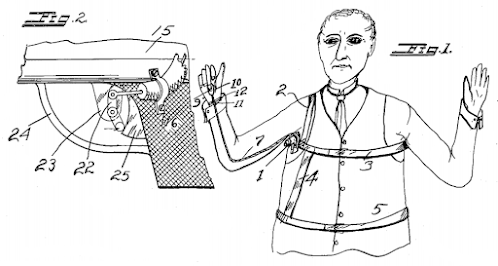 It was intended to be used by cashiers or bank tellers who were told to put their  hands up during a robbery. This device would have allowed them to fire their pistol without lowering their hands. (Yikes!)
Via Futility Closet
Posted by The Nag at 10/21/2021