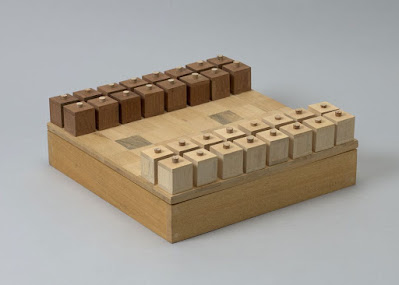 Spice Chess  was created by Japanese artist Takako Saito. These were one of a variety of unique chess sets made for the Fluxus art movement of which she was a member. The Spice Chess was originally manufactured winter 1964-65, and offered for sale March 1965. Each piece is a box containing a spice. There are pawns filled with cinnamon, ginger knights and cayenne pepper queens. A player of spice chess had to memorize the smells of each piece before playing.
Via FB friend Simon
Posted by The Nag at 9/21/2020