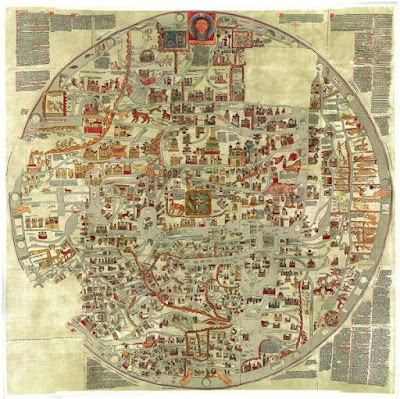 The Ebstorf Map from the 13th century is a medieval map which is considered to be a visual encyclopaedia of the knowledge of the world ca. 1250.  It covers theology, geography, biology, secular history and the history of salvation as well as myths and bestiaries.The original was lost during WW2 but it is well known from a number of photos, lithographs and facsimiles. A reproduction may be seen at the convent at Ebstorf, where it was found in 1830.

The original consisted of 30 single pieces of goat-skin, sewn together, measuring 3.5 x 3.5 metres, and rolled up. Although the map is part of the genre called “Mappa Mundi” (idealised representations of the known world) it differs by its sheer size and its compactness of information.

According to new research carried out by the Historian Gudrun Pischke it holds 2345 entries – 1500 pieces of texts, 845 pictures showing buildings (500), rivers lakes, seas and other waterways, islands (60), people (45) and animals (60). To this should be added numerous religious motifs.

Like all Mappae Mundi the map is oriented towards the east. The earth itself forms the body of Christ, as witnessed by his feat dangling below. In the centre we find a gold-framed presentation of the resurrection, located smack in the middle of Jerusalem.