“Micro-Engraver” Works Between Heartbeats To Keep His Hand Steady

In 2012 an Indian artist from Assam called Sujit Das created a carving of the Hindu goddess Durga which measured just one inch. British micro-engraver Graham Short bested him by carving a Durga image that is a mere millimeter across.

Short’s most recent work is a portrait of Queen Elizabeth II carved onto a speck of gold stuffed into the eye of a needle! 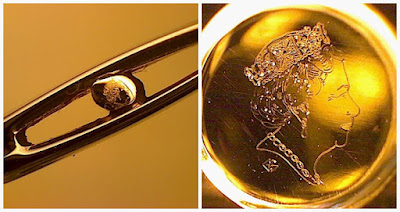 Silence is an essential part of Short’s technique.. Taped to the wall of his studio is a sign reminding him to switch off his mobile phone. To avoid the vibrations of passing lorries, he works only at night.

To steady himself, he ties one end of a strap around a heavy piece of machinery in his studio. He secures the other around his right arm, pulling it taut. He tapes a stethoscope to his chest and places the earpieces in his ears. Listening through the stethoscope, he carves when he is at his stillest—in between heartbeats.

Read more here about the lengths Short goes to when creating his miniature masterpieces.