The French-Tunisian artist eL Seed assembled a team to paint a large mural across ore than 50 buildings in the neighborhood that is home to Cairo’s garbage collectors. The piece references the Mubarak government's decision during the swine flu epidemic in 2009 to kill all of Egypt’s pigs, including thousands kept by the garbage collectors, who used them to consume organic waste. The mural, a circle of orange, white and blue in Arabic calligraphy, quotes a third-century Coptic Christian bishop who said, “If one wants to see the light of the sun, he must wipe his eyes.”

The viewer's perspective affects what is seen:


From the streets of the neighborhood, the painting appears in fragments: above a courtyard where members of one family carefully search for recycling in bags of trash, or looming over a rooftop occupied by a handful of sheep. The bracing scale of the mural is fully visible only from the Mokattam Hill on the edge of the district, near a famous cathedral carved inside a cave. 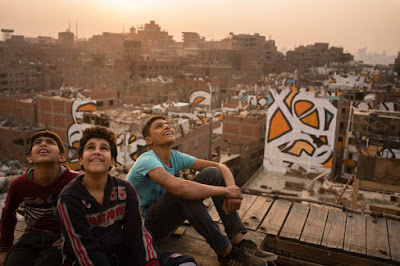 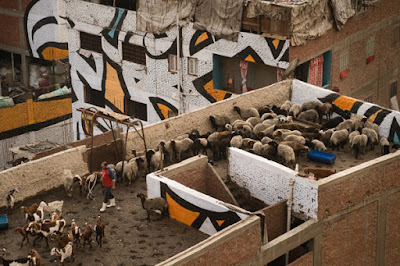 Credit
Read about the obstacles facing the artist as he created the mural: The New York Times