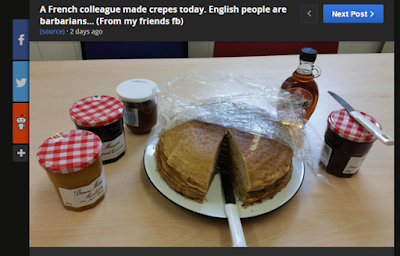 When a French member of staff took a plate of homemade crêpes into his British workplace for colleagues to enjoy on Shrove Tuesday he didn't know that he would unleash a social media storm but that's what happened when someone cut a slice out of the pile as if it was a cake.
When a photo of the desecrated stack appeared on Reddit comments flew fast and furious.

The French were indignant:

“A French colleague made crêpes today. English people are barbarians”
“Agincourt, Waterloo - and now this makes the hat-trick”.
“Don’t ask why we were at war for 100 years (and we might again given those barbaric actions”.

The Brits fought back:

"This makes me oddly proud to be British."
"As a Brit, this person knew exactly what they were doing."


This story proves that, when national pride is at stake, there is nothing too petty to argue about, even a disc of flour, egg and milk.
More here
Email Post