A Month of Ties

Ten years ago, David Shipley received a package from his mother. It contained neckties his father no longer wore. Shipley put them in a closet for a decade. Then he decided to wear one a day for a month and to keep a diary. These were his rules for the project:

"The ties had to be worn all day. There would be no hiding under sweaters. And they had to be worn in order. I’d work my way down from the top layer to the bottom, taking what the box gave me, regardless of the day’s events. Also, there’d be no excuses or explanations. If asked about a tie that was as wide as a flapjack, I could say only, “It was my father’s.”

He began with this one: 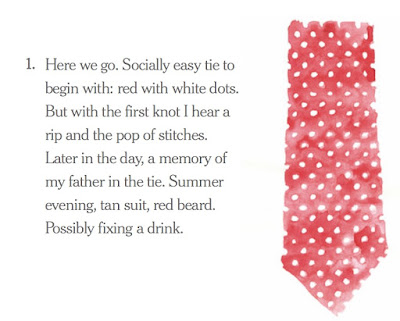